Link your wedding theme, wedding decor and wedding favours to the history, style and sense of place in Ebbw Vale.

Your wedding theme may be linked to your own past, to key moments in your relationship with each other, your favourite colours, your personal tastes, or you may incorporate elements of your home

town of Ebbw Vale into your wedding day 'story book'.

Reflect the story of Ebbw Vale in your decor, to connect your personal history in your home town's roots, and your family's location in Ebbw Vale. You may get some ideas from the history of Ebbw Vale below, its buildings, street names, or local transport routes etc.


Interesting Facts About Ebbw Vale you may not know and could use in your wedding theme/ decor/ story:

2. Until the end of the C.18th Ebbw Vale was a small hamlet of 120 people. It was trsansformed by the Industrial Revolution with the opening of the steel works in 1778 and coal mining from 1790. In the 1930's the steel works at Ebbw Vale was the largest in Europe. In the 1960's 14,500 were employed in the steelworks, but massive redundancies and decline followed the 1980's strikes and by 2002 all the old steelworks were closed. This was the end of the industrial era for Ebbw Vale.

4. Unemployment rates in Ebbw Vale are among the highest in Britain following the collapse of the steel industry.

5. Two famous politicians represented Ebbw Vale. Aneurin Bevan, the father of the National Health Service, represented Ebbw Vale as a Labour Party MP from the 1929 general election to 1960. When he died in 1960, he was succeeded as MP by Michael Foot. The seat is now called Blaenau Gwent.

7. £18m was spent developing Festival Park which held the last National Garden Festival but in the last 16 years has fallen into decline and needs more investment. It is now a retail park of 40 shops.

8. The site of the Ebbw Vale Steelworks is known as "The Works". This is subject to a £350m redevelopment into housing, retail and office areas, wetlands and an educational facility.

9. The Ebbw Vale rugby team is nicknamed 'The Steelmen' after the steelworks in the town.

10. A railway service to Cardiff Central from the new Ebbw Vale Parkway rail station began February 2008. A second service to Newport is scheduled for 2014.

Reasons for choosing Craig y Nos Castle wedding venue over all other wedding venues near Ebbw Vale:
Craig y Nos Castle's Weekend & Weekday Wedding Package offers FREE Exclusive Use of all the Castle ground floor function rooms (saving you £3,500 in venue hire for exclusive use of the whole castle over the regular wedding tariff) to Brides and Grooms from Ebbw Vale if you invite 50 guests to stay overnight at the castle on a B&B basis.
You can have all your guests stay under one roof for the duration of your wedding day. Party late into the night, with no worries about you or your guests getting back home.
Craig y Nos Castle wedding venue can sleep up to 81 guests in its en-suites and family rooms and a further 20 guests in its non en-suite budget rooms. Craig y Nos Castle is probably the only castle wedding venue where all your guests can stay with you together overnight. When your 50 guests book in at an affordable £75 B&B per guest, you get the castle venue exclusive for your wedding party. The three course wedding breakfast, with chair covers and silver or gold candelabra table decor, is £57/ guest..
A unique Wedding Venue - the romance of a real Welsh Castle combined with the historic grandeur of our very own Opera House - exclusively yours for the day. We are the only castle wedding venue that has its own historic theatre in which you can get married. Our Grade One listed opera house is licensed for wedding ceremonies. Craig y Nos Castle only accepts one wedding a day, so you and your guests will have the run of the whole ground floor of the castle exclusively.
Unlike most wedding venues, you're not confined to just one room; your guests have the run of all four ground floor tall ceilinged reception and function rooms - see below:

Ideas for your wedding based on the history of, facts about and facilities and attractions in Ebbw Vale.

1. Steelworks and steel  industry; refer to old pictures of the steelworks for inspiration. Incorporate into a storyboard about Ebbw Vale.

2. Include Kinnock and Bevan on storyboard.

4. Visit Festival Park for further products and ideas you might be able to source locally. 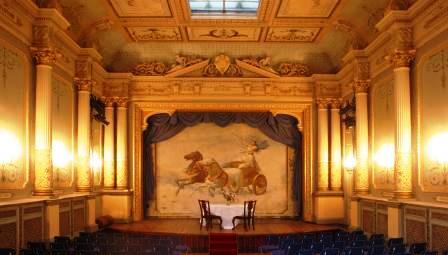 You may have some guests who live some distance away from

Ebbw Vale, who will need to travel to your wedding anyway, so it won't matter to them so much where you get married. You may have more guests on your wedding invitations list who live local to you. These include your friends and neighbours and acquaintances and even work colleagues in and around Ebbw Vale, for whom it would be more convenient to choose a local wedding venue.

You'll ask yourself, do you want a local wedding venue near

Ebbw Vale where all your guests can get to easily - even though you may not find your ideal venue locally?

Unlike with a local wedding, when you travel to Craig y Nos, you will not suffer the problem of some guests shooting off early to get home. This can be a problem with local weddings nearer

Ebbw Vale as 'local' means the wedding party dwindles around 11-12 pm, bringing about an earlier finish to the day than you want.